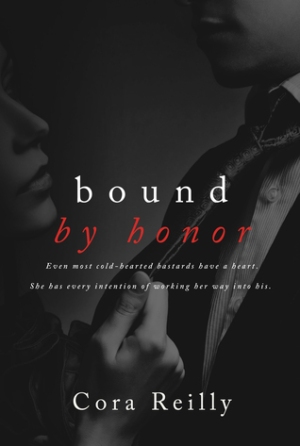 Born into one of the leading Mob families in Chicago, Aria Scuderi struggles to find her own path in a world where no choices are given. Aria was only fifteen when her parents betrothed her to Luca – The Vice – Vitiello, the oldest son of the head of the New York Cosa Nostra to ensure peace between the two families.

Now with eighteen, the day Aria has been dreading for years is looming dangerously: her wedding to Luca.

Aria is terrified of marrying a man she hardly knows, especially someone like Luca who got his nickname ‘the Vice’ for crushing a man’s throat with his bare hands. Luca might be one of the most sought after men in New York thanks to his good looks, wealth and predator-like charisma that radiates power, but the society girls throwing themselves at him don’t know what Aria does: that the bad boy aura isn’t just a game; blood and death lurk beneath Luca’s striking gray eyes and arrogant smile.

In her world a handsome exterior often hides the monster within; a monster who can just as easily kill as kiss you. The only way to escape the marriage to Luca would be to run away and leave everything she’s ever known behind but Aria can’t bear the thought of never seeing her family again. Despite her fear, she decides to go through with the marriage; Aria has grown up among predators like Luca and knows that even most cold-hearted bastards have a heart and she has every intention of working her way into Luca’s.

I was on holiday in Italy and as you do me and my companions got chatting about the Mafia, don’t ask, then I had a really strange dream about being in the Mafia which was weird and after that I had the strong urge to read a Mafia book. Which is how I ended up reading this book even though I had loads of other books waiting on my shelf, I’m definitely a mood reader.

The tension, I loved that Aria and Luca were thrown into this situation and how they handled it, of course it can’t be a romance without a few bumps and these bumps really helped with keeping me hooked into the story.

Luca, I do like an alpha bad boy and the suited and booted type even more so, so he ticked all the boxes. The way he slowly starts to show his feelings for Aria made me swoon.

The relationship that Aria has with her siblings, which I wished we got to see a bit more of but it was nice that in their fractured home situation that they stood by each other.

I didn’t completely dislike Aria, I liked her honesty and how she chooses to get on with her situation even though she is terrified but I felt like I saw a glimmer of defiance that would turn into something more and it didn’t. She spent a lot of time flinching and being scared and not standing up for herself. I did like her but I feel she could have been more.

I mean I know I’m reading a book about the Mafia and they have their own set of rules to live by and whilst in the end I loved it, my brain was at points also screaming at me that the whole wedding, looking at the sheets, girls being married off young was creepy.

This was totally what I was looking for in a Mafia romance, a bit uncomfortable at times but mostly just an entertaining read that will get you a bit hot under the collar with a handsome alpha male.

One thought on “Book Review | Bound By Honor”