If you like fantasy and magic then you’ll be interested in today’s book, The Telling, plus there is a pretty great giveaway for this tour so be sure to scroll down to check it out. 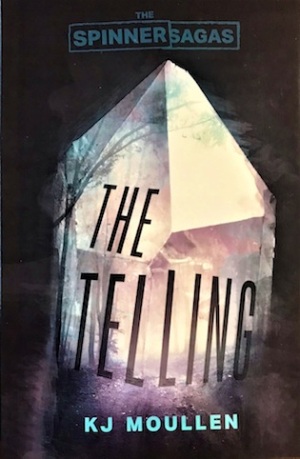 Sixteen-year-old Blaine was a normal teenage girl. Sure, she moved around a lot, but that wasn’t completely weird, right? Then her mom tells her she’s actually from another dimension called Renault, whose inhabitants can do magic. Um, what? Suddenly, Blaine is running from an evil she barely understands. Blaine is thrust into the confusing, beautiful, and magical world of Renault with a mysterious boy she just met. There, she begins to discover her own unique abilities and her place in the universe.

The Telling definitely had me intrigued from the start, it gets going pretty quickly but can be a lot to get your head around. Whilst the first little part is set on Earth we are soon transported into other worlds.

The world-building was good, it takes a while for some things to be explained but I think that works well considering how much information you need to take in about Renault and the other places that Blaine visits. There was a lot of nice imagery as well, I didn’t find it too difficult to picture anything that was being described.

The premise of the story was interesting and kept me pretty engrossed throughout, always wondering what would happen next. A little bugbear was that there was a lot of build up toward Blaine meeting the antagonist of the book and I felt like the end was a little too rushed to do it justice. It kind of fell a bit flat, and was maybe just a bit too neatly tied up as well.

There was a varied cast of characters, I have to say I loved that there was a unicorn and other creatures rather than just elves and fairies. I felt a bit mixed about Blaine though, she was fine for the most part but there were a few little things like managing to work through her own problems instantaneously, which I think just wouldn’t happen even in a fantasy world and, of course, the insta-love.

I could understand it from Elian’s point of view because he’s been aware of her for a long time but Blaine is too quickly in love for my liking, especially because this is a series so it could have been built up over more time quite easily. That is a very personal thing though I know that there will be readers out there who are all for it.

This series has a lot of promise and I’m looking forward to seeing where it goes next.

There is a super brilliant giveaway to go along with this tour, so click the link below to be in with a chance of winning…

K.J Moullen started her life as an adventurer. She always loved the outdoors, whether it was playing king of the hill with her pet goat in southern California, playing hockey on the frozen lakes of the Kenai peninsula of Alaska, or snorkeling and surfing off the shores of Maui. Amongst the breathtaking places she lived, her imagination and love for writing knew no limitations, allowing for a lifetime of plotlines and characters to be created and written about. She now shares her life’s adventures with her husband and two children in their home in North Texas.

One thought on “Blog Tour | The Telling #review #giveaway”