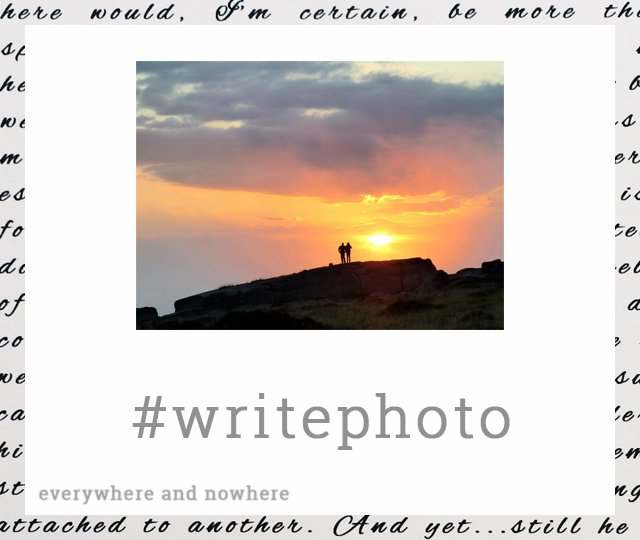 It was one of those days. He’d been so organised the night before, he’d made his lunch so that he could eat it at his desk and get out a little early from work, only to realise on the train journey in that he’d left it in the fridge. Work was surprisingly hectic, he thought that he would have time to make some last minute arrangements during the day, but either the phone was ringing or someone was looking for him and he didn’t get the chance. Then, just to top it all off, on his train journey home they were stopped in between stations for half an hour and he ended up arriving home at the time he usually would.

The thought niggled that maybe it was a bad omen, but not enough to change his mind.

They were hand in hand, chatting and laughing; mostly at how ridiculous his day had been; as he steered them toward the spot that he’d scoped out a few weeks ago. It looked like it could be a perfect evening, the picnic basket was filled with good food and some bubbles, it had been dry and warm all day and they’d managed to still make it in time to watch the sunset.

They stood admiring the colours in the sky, he laid out the blanket and opened the basket, he hadn’t paid heed to the way they had both suddenly felt the need to scratch the skin that was exposed to the elements. They sat and opened the prosecco and clinked glasses, watching the oranges change to a deeper red.

A minute; and even that might be overly generous; was all it took.

The midges swarmed, in an unbearable way, in an almost biblical plague kind of way. They put a brave face on it for a little while and then he started to feel like they had gotten into his clothes and were flying around biting every inch they could find, he knew that she would be feeling the same way and was adopting a grin and bear it attitude so that she wouldn’t spoil his romantic evening.

He decided to put them both out of their misery and they packed up everything as quickly as they could. The sun had all but disappeared as they tried to navigate their way back to the car, he was at least relieved that he had decided against walking the whole way.

She claimed the first shower, they both still felt like they were being bitten even after driving a couple of miles away. Once the water was running and he could hear her rummaging through the assortment of shower gels, he took the little black box out of the basket and put it back in it’s hiding place. Another seemingly perfect opportunity gone awry.

Maybe it would be third time lucky.

Written in response to the #writephoto prompt that was created by Sue Vincent.

Use the image and title provided as inspiration to create a post on your own blog… poetry, prose, humour… light or dark, whatever you choose…and link back to the promt post with a pingback to be included in the round-up.  There is no word limit and no style requirements, except to keep it fairly family friendly and not passionately political.