Kicking off Friday with a guest post from author Jo Perry giving us a bit more background on Rose and it features pictures of a cute doggo. 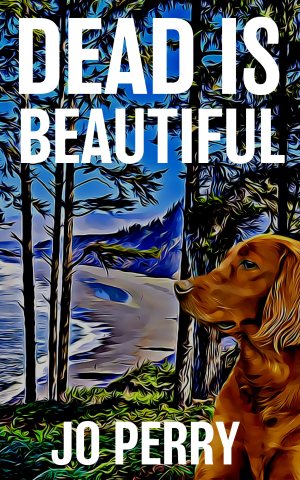 DEAD IS BEAUTIFUL finds Rose leading Charlie from the peace of the afterlife to the place he hates most on earth, “Beverly Fucking Hills,” where a mature, protected tree harboring a protected bird is being illegally cut down.

The tree-assault leads Charlie and Rose to a to murder and to the person Charlie loathes most in life and in death, the sibling he refers to only as “his shit brother,” who is in danger.

Charlie fights-across the borders of life and death–for the man who never fought for him, and with the help of a fearless Scotsman, a beautiful witch, and a pissed-off owl, Charlie must stop a cruel and exploitative scheme and protect his beloved Rose.

Inside of a Dog

My mystery series features two ghostly protagonists, Charlie, a murdered man, and Rose, the dead dog he encounters in the afterlife.  After a few adjustments (The ghosts cannot be seen, heard, felt by the living.) writing a dead man is not much different from writing about a living man––albeit a man without a cell phone, a gun, an audible voice, or a computer––a man powerless to make himself known to the living or to directly affect events.

A human ghost is familiar: we’ve all felt powerless, unheard, and invisible.

But dogs are powerless, often ignored. They’re forced to accommodate human schedules. These creatures whose joy is running free are shoved in cages euphemistically called “crates” for whole days at a time, and when they’re outside,  they’re “trained” by prong or choke collars, forced to assume a painfully slow human pace, to sniff and to shit when permitted to by a “master” for whom they are expected to sit and to beg for attention and food.

Dogs are categorized as “good” or “bad” according to how submissive they are––and “shaming” them when they fail is supposed to be hilarious. Dogs are not measured by how fully and wonderfully doggy they are, how utterly they express their dogginess, or how joyfully they use their supernaturally finely tuned canine bodies and canine minds.

So writing a dog––alive or dead––without reducing, sentimentalizing or anthropomorphizing, imposing a human point of view––requires humility and discipline, demands that the author immediately concede the impossibility of really understanding dog-ness, and that describing a dog with the completeness and accuracy a dog deserves calls for vigilance and respect, especially when describing canine emotion or empathy or a dog’s miraculous capacity to mirror the feelings of the human beings it loves.

A publisher to whom I submitted the first fifty pages of the first book in the series, Dead Is Better, told me that he’d liked what he read but that, “You can’t have a dog detective. Get rid of the dog.”

The dog is everything.

The dog isn’t the detective––she’s the mystery.

Rose the dog inspired the series and the books are about her as much as they are about Charlie. But looking back I think that the publisher was correct that you “can’t have a dog detective,” i.e. you can’t have a dog impersonating a human being––that’s fakery. That’s cartooning.

Living dogs can be trained to devote their sharp reflexes and precise, miraculously sensitive and complex noses to detect and track traces and substances too subtle for human beings to discern. But a ghost dog can’t do that––Rose can never taste the multi-scented air, can never unbraid one delicious or horrible smell from the others or find its appalling or appetizing source.

Still, Rose––though death-diminished––is a dog alert to the moment, to the possible and has her own unique temperament and history:

Rose is a dead red setter mix who spent her short life alone and who died from abuse and neglect. I had to imagine what finding herself in the afterlife––no longer in pain and no longer alone––would feel like to her, what being with an irascible but sweet man like Charlie would involve for a dog used to cruelty and indifference from people, and how the relationship of dog ghost to ghost man might deepen into something transformative and more profound than just companionship.

Groucho Marx said, “Outside of a dog, a book is a man’s best friend. Inside of a dog it’s too dark to read.”

Inside of a dog is a mystery this writer navigates blind.

Inside of Rose is a beautiful ambiguity that Charlie will never fully decipher.

The abandoned dog who found me in a Home Depot parking lot a decade ago is the model for Rose’s lovely inscrutability. 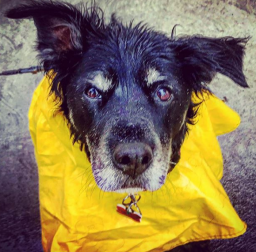 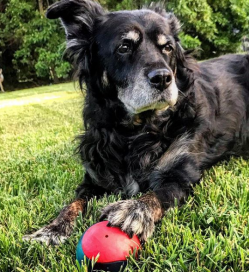 She’s a clairvoyant–– a lucid and constant see-er. Her patience is bottomless. She remembers everything and knows thousands of words. She’s a silent, sober witness, a seismograph, a connoisseur of grass and peanut butter, a discerner of minuscule disorder attuned to the slightest variations emotional temperature. She’s a miracle of sweetness, a cabinet of virtues. A snorer and a sniffer.  A timekeeper. An alarmist. A follower. A leader. She––like every other dog including canine ghosts––is a revealer of the occult––the hidden––bits of food, bird droppings, fallen nests, so-delicate- they’re-almost-invisible-spiders, lost socks, pieces of paper, motives, lies and truth––and her eyes––like Rose’s––are mirrors of the human heart.

She lives in Los Angeles with her husband, novelist Thomas Perry. They have two adult children. Their two dogs are rescues.

Jo is the author of DEAD IS BETTER, DEAD IS BEST, DEAD IS GOOD, and DEAD IS BEAUTIFUL, a dark, comic mystery series from Fahrenheit Press.