This morning I have a guest post from author Lee Matthew Goldberg about the art of pacing.

Any wish fulfilled for the right price. That’s the promise the organization behind The Desire Card gives to its elite clients – but sometimes the price may be more menacing than anyone could ever imagine.

Harrison Stockton has lived an adult life of privilege and excess: a high-powered job on Wall Street fuels his fondness for alcohol and pills at the expense of a family he has no time for. Quite suddenly all of this comes crashing to a halt when he loses his job and at the same time discovers he almost certainly has only months left to live.

Desperate, and with seemingly nowhere else left to turn, Harrison activates his Desire Card. What follows is a gritty and gripping quest that takes him from New York City to the slums of Mumbai and forces him to take chances, and make decisions, he never thought he’d ever have to face. When his moral descent threatens his wife and children, Harrison must decide whether to save himself at any cost, or do what’s right and break his bargain with the mysterious group behind The Desire Card.

The Desire Card is a taut fast-paced thriller, from internationally acclaimed author Lee Matthew Goldberg, that explores what a man will do to survive when money isn’t always enough to get everything he desires.

THE ART OF PACING

Pacing is one of the most important tools in a suspense thriller. If tension isn’t created for a reader, it will be hard to get them to keep turning the pages. In my new novel THE DESIRE CARD, the structure is set up with four acts. Each act puts my main character Harrison Stockton through the ringer when he finds out he has liver damage and contacts a shady organization to get a new one for him off the black market.

Each act, in a sense, becomes its own book with a set-up, climax, and denouement. Equally important are the novel’s twists and turns set to shock and awe. Having too many in one act can cause the reader to have too much whiplash. Readers enjoys twists, but they need to be delivered at the right time. If the novel is overstuffed with twists, a reader starts to question if the twists are more important than the characters.

A plot has to feel organic. Readers want to believe what happens to the characters. This was one of the first books I wrote with a detailed outline first. The book came from a quick idea of a plot, but required knowing all of the character’s trajectories before I could begin.  Then, once I did, I could focus on the pacing. The choice to start the novel with a prologue or tease was one I wrestled with, but I wanted a quick burst of action before the introduction to the characters that readers would be spending time with.

This way you know from the start that Harrison gets himself into a jam difficult to rectify. The readers don’t know exactly what the jam is, so part of the thrills is watching to see how he got himself into this mess and how he will finally get out (if he ever does). Because you partially know that something bad will happen from the get-go, it was even more important to pace the book with a good amount of twists and turns. Even if you think you know where it’s headed, you don’t know completely.

For the second novel in the series PREY NO MORE, I took a different approach. The book would be much more fast-paced and action related. Instead of an outline, I decided to write the first draft as a screenplay. I needed to get the beats established along with the dialogue. I had never adapted a screenplay into a book before, but it was a relief because the pacing was already there once I started the novel. In it, a minor character from the Desire Card becomes the star when he decides to leave the evil organization he has worked for and becomes hunted down.

The novel is a pure cat-and-mouse thriller that focuses on survival at all costs. While the Desire Card is about survival when Harrison’s body starts giving out, J.D. Noble, the main character in Prey No More, literally becomes prey at the hands of his former boss and the boss’s minions. For the novel to succeed, the reader had to feel like they were in as much danger as J.D. The novel is set up with a three-act structure almost like a play.

While it’s important in a thriller to keep the action going and for the reader to sweat, pacing is also required to break up the action. There needs to be moments that a reader that can catch their breath. In Prey No More, that happens in the scenes with Annie, J.D.’s former girlfriend, as they rekindle their relationship. But the tension is always there because you don’t know how honest Annie is being or if she has ulterior motives.

The same set-up works for the Desire Card. Just like J.D., Harrison doesn’t know who he can trust. Because the organization wears masks to hide their identities, they could potentially be anyone—even a trusted friend. This allows the reader to never fully trust any character, knowing they could always have a dark side. Even in moments of calm for Harrison or J.D., their lives are always in danger—keeping the pacing going at an accelerated pace.

While pacing is extremely important in thrillers, I believe it’s necessary to consider in every novel. The job of a writer is for readers to always turn the page. I heard that Stephen King like to ramp up the action toward the bottom of a page so readers are always tempted to turn to the next one. I try to employ a similar type of strategy in all my books as well. So the pages keep on turning until the reader can’t help but reach the end. 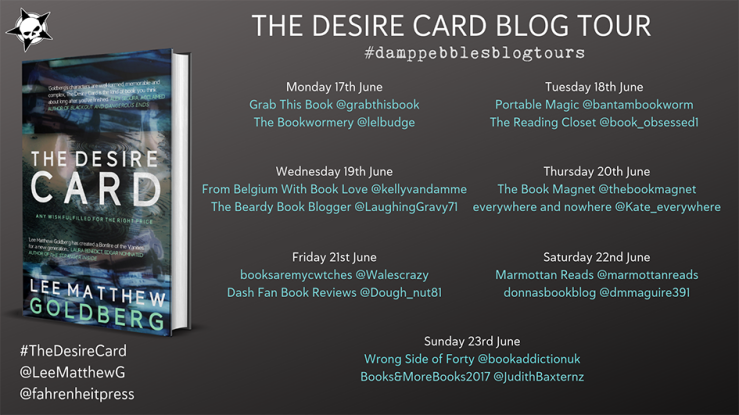 Lee Matthew Goldberg is the author of the novels SLOW DOWN, THE MENTOR, and THE DESIRE CARD. He has been published in multiple languages and nominated for the 2018 Prix du Polar. The second book in the Desire Card series, PREY NO MORE, is forthcoming from Fahrenheit Press in 2019. His pilots and screenplays have been finalists in Script Pipeline, Stage 32, We Screenplay, the New York Screenplay, Screencraft, and the Hollywood Screenplay contests. After graduating with an MFA from the New School, his writing has also appeared in the anthology DIRTY BOULEVARD, The Millions, Cagibi, The Montreal Review, The Adirondack Review, The New Plains Review, Underwood Press and others. He is the co-curator of The Guerrilla Lit Reading Series (guerrillalit.wordpress.com). He lives in New York City.