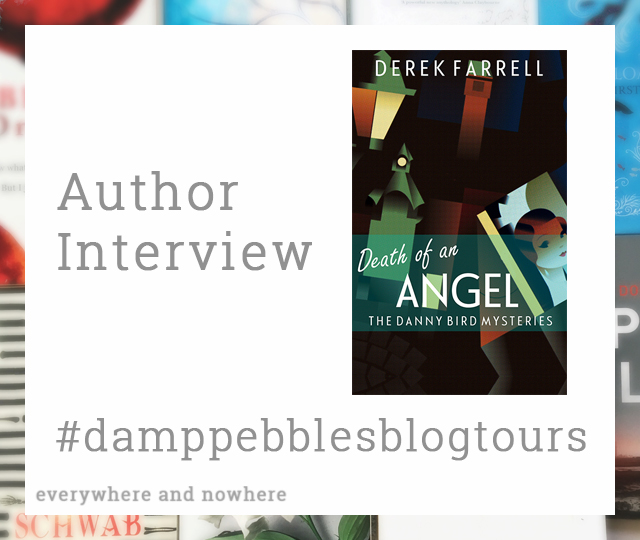 Today I have a little question and answer with author Derek Farrell.

A woman is found dead in a London street – the evidence suggests she plummeted to her death from a nearby tower block – but did she fall or was she pushed? And why does she have Danny Bird’s name written on the back of her hand?

So begins this 4th magnificent outing for Danny and the gang from The Marq.

In the frame for a murder he didn’t commit, London’s self-proclaimed Sherlock Homo has no choice but to don his metaphorical deerstalker one more time to prove his innocence and uncover the truth about the tragic death of Cathy Byrne.

With the indomitably louche Lady Caz by his side, Danny plunges headlong into a complex investigation while at the same time trying to be a dutiful son to his increasingly secretive parents, and still find the time to juggle his frustratingly moribund love-life.

First of all, can you please tell us about your latest book?

In Death of an Angel, a woman is found dead in a London street – the evidence suggests she plummeted to her death from a nearby tower block – but did she fall or was she pushed? And why does she have Danny Bird’s name written on the back of her hand?

This is a book about greed and grief, about family and community and about what people are capable of when they’re pushed to the limits, and I couldn’t be prouder of it.

Where do you find inspiration for your novels?

That’s a really good question. I find inspiration in two places: Passion and Logic. The books, at a superficial level, are puzzles. What happened to the woman who falls from the tower block? Why does she have Danny Bird’s name on her hand when he’s never met her? Why did someone leave an envelope full of newspaper cuttings with a solicitor days before they drove themselves over a cliff? And what is going on with Danny’s parents? I need the logical part of my brain to come up with those ideas (eg “What if a woman fell from a tower block and had Danny’s name on the back of her hand?”) and to then play with them and see what comes out – what questions I can ask, and how I can satisfactorily set them.

The other part of the equation is Passion: The things I love and the things I hate, which – beyond the puzzles and the sharp dialogue – tend to be what the books are actually about. So the books will be about things I love – friendship family and community runs through them all, but also love, romance, justice, food (lots and lots of food) booze (they centre round a pub), London, and the brilliant craziness of people. And they’re also about the things I hate – Greed, bigotry, intolerance, bullying, anything that makes another human being feel small or worthless.

Who is your writing hero?

Genuinely: anyone who gets up, gets to their desk, and gets the words down day after day after day. I’m vey fond of the work of Lawrence Block, who writes sharp witty crime with a streak of sadness set (often) in New York City, but also of Agatha Christie, who wrote a very different type of book. Both of them did or (in Block’s case) continue to do this for many years, and the longevity – the writing no matter what – is something I aspire to.

Which book do you wish you had written?

I try not to judge myself against other writers cos that’s never a wise thing to do. Each of my books needs only to be better than the earlier Derek Farrell Books, but that said I’d quite like to have written “The Great Gatsby” instead of Fitzgerald, cos it’s a book I can read again and again and again and never get tired or bored of it. Also, I’d love to have written Blue Heaven by Joe Keenan because it is one of the funniest books I’ve ever read. On the other hand writing “The Da Vinci Code” would be nice, cos, y’know: Ker Ching!

What advice would you give to someone considering taking the plunge and attempting to write their first novel?

Do it. Just sit yourself down and do it. Don’t think about it, or talk about it, or read about it or clean your house while waiting for the muse to strike. Just do it.

That said, read a few books on the craft before or during the process. It’s amazing how less scary the blank page can be when you have the nuts and bolts of novel writing in your toolkit.

Be kind to yourself. A great friend of mine once said of a first novel that your power is in the fact that nobody cares how it turns out. No publisher has already committed the Q4 earnings to pay the Christmas Bonus. No bookshop is going to be out of pocket if it doesn’t sell, or misses a deadline. You can make this book whatever you want, whether commercial or not, because the point is to produce something that you find enriching and enjoyable, and to learn during the process.

That said, be realistic: I still have people telling me that they ‘need this book to be good so I can quit my job.’ Newsflash: this book could be the best book ever. You are highly unlikely to retire on the take from it. Oh, I know that outliers still exist and make the news – that debut author who signs for a million – but they make the news because they are so rare, and if you think your job is stressful, imagine the stress of a million pound advance weighing you down while you try to figure out which of the helpful edits suggested by a hundred interested parties to consider and which to reject.

That said, if anyone wants to offer me a million quid for my standalone “Woman with Tattoos in peril on a Train (only she’s really a ghost what sees the future)” do please get in touch.

Lastly, again, – and I can not stress this enough. Do It. Then move on. It’s your first novel; please don’t make it your only novel. You’re not James Joyce (and if you are: Hey Jimbo. You owe me the summer of 1992 back: Ulysses was a bust). I see so many people who, having written a good first draft spend the next six years polishing it and polishing it and polishing it and… well, you get the gist. Now, I know they always say that the book should be perfect before you submit it anywhere, but I’m a bigger believer in the fact that perfection is impossible, and the book should be as good as you can make it. Write the book. Make it great. Write the next one. Make it greater. Repeat.

If you could have a dinner party and invite three other writers (living or dead), who would you invite?

Brendan Behan – Once described himself as a Drinker with a writing problem. Foul mouthed and funny AF. Political but not dogmatic. And a giant of a man who wrote as delicately as a butterfly.

Dorothy Parker – who died almost exactly a year before I was born but whose writing – prose, poetry, drama criticism, lyrics, articles – can make me laugh out loud and cry my eyes out. Her stuff is timeless and human.

Armistead Maupin – so I can say thank you for Tales of the City, and for letting the young me know that there was a great big fabulous life out there, if I’d only take the first step.

What’s the one question you wish I had asked and what’s the answer?

What’s next? Next up is a new Danny Bird Project which Fahrenheit Press have commissioned, and which I’m really excited about. I don’t know how much I’m allowed to say about it, but it’s making me smile a lot, and forcing me to really think about what I want to write.
I’ll be appearing at a special Polari Salon at Morecambe & Vice later in the summer to read a selection from Death of an Angel (or possibly the new work if it’s ready by then) and I’ve also just launched my new website derekfarrell.co.uk which has a brand new and exclusive free Danny ebook for anyone who signs up, so I’m setting up lots of fun content and competitions for that. It’s busy round here, but I thank whatever angels granted me my wish every single day.

He was educated in Dublin, and, whilst waiting to become a writer of fabulous crime novels has passed his time being a burger dresser, bank cashier, David Bowie’s paperboy, and an Investment Banker in New York’s World Trade Centre (a bit like The Wolf of Wall Street, only with fewer hookers and more midgets, since you ask).

He is married and divides his time between London, West Sussex and Dublin.

Derek loves to hear from his readers, and can be contacted via Twitter: @derekifarrell or at his sparkly new website Derekfarrell.co.uk

His books can be purchased as paperbacks or ebooks direct from the publisher Fahrenheit Press at: http://www.fahrenheit-press.com/books_fahrenheit.html or from Amazon:

Death of a Diva is also available as a deluxe edition Hardback limited to only 50 Copies worldwide. Purchase it here.

2 thoughts on “Q & A | Death of an Angel #BlogTour #damppebblesblogtours”