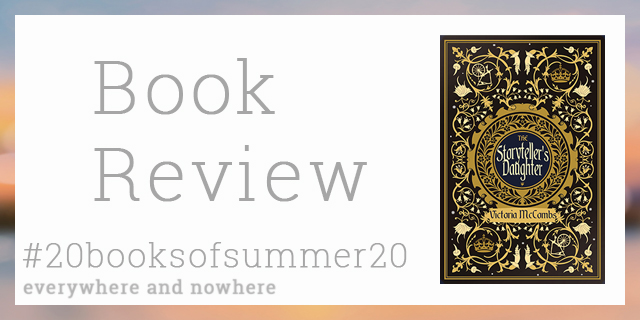 At this point the list is completely out of the window and I’m just reading whatever I fancy, but that’s ok, so here is book three toward my challenge.

His shadowed face lit by flames,

Rumpelstiltskin is my name…

For as long as anyone can remember, every child in Westfallen has been born with a Gift, and these Gifts defined them.

Then Cosette is born, Giftless.

An attempt to hide her misfortune brings her before the King, who entraps her to use her Gift as a pawn in his war.

Caught in a lie, Cosette desperately searches for a power strong enough to free her. Intrigued by whispers of an old king and a dark curse, she calls upon Rumpelstiltskin and finds him trapped in a magic deeper than she bargained for. Now, Cosette must fight to reclaim her freedom from the King and break Rumpel’s curse. When time runs out, she’ll lose more than her heart. She’ll lose her life.

I feel like it’s been a long time since I read a retelling and I love them so I was super excited for this one, also I haven’t read a Rumpelstiltskin retelling before so that added to my intrigue about this book.

I really enjoyed The Storyteller’s Daughter, the storyline was fantastic and even though it is a retelling it did have a feeling of originality about it. There was enough suspense in wondering who Cosette could trust at the palace, whether she would be caught out by the prince or the king and what Rumpelstiltskin’s motivations for helping her were, to really keep me engrossed in the pages.

It would be hard not to fall for Cosette, the girl who feels like an outcast and suddenly has a burden placed upon her but manages to mostly stay true to herself. What I loved the most about her was her honesty about her feelings, in a typical fairytale kingdom where it is expected that girls are to be married, even though she is already at a disadvantage by having no gift, she is determined not to jump into the decision because she knows she wants to feel love for the person rather than just security.

I liked that this was especially true with the prince, as she starts to get used to her better treatment and access to finer things at the palace she is more interested in the food and the library than the prince and was upfront about it with him, even though she knew it could put her in a worse position.

Of course the character that really drew my attention was Rumpelstiltskin, his mysteriousness to begin with and then his relationship with Cosette as it starts to bloom from a necessary dependance into something more. It was lovely to read, and it wasn’t rushed, it was given the right time to explore what it meant for both of them. It was very hard not to fall in love with him and his ethereal magical self and I have to say that things got pretty emotional for me toward the end, there were definitely a few tears shed.

The only thing that left me a tiny bit dissatisfied, was the overall ending, it all felt a bit too easy, considering the time taken over the rest of the story perhaps a bit rushed, and the fact that Cosette wasn’t directly involved with something that had been one of her main goals for a lot of the book just didn’t feel quite right.

Overall The Storyteller’s Daughter is a delightful book, with characters that I couldn’t help but be charmed by and a lovely easy way of writing that easily captivates. A brilliant book for my first Rumpelstiltskin retelling and I will be eagerly anticipating what the author will come up with next.