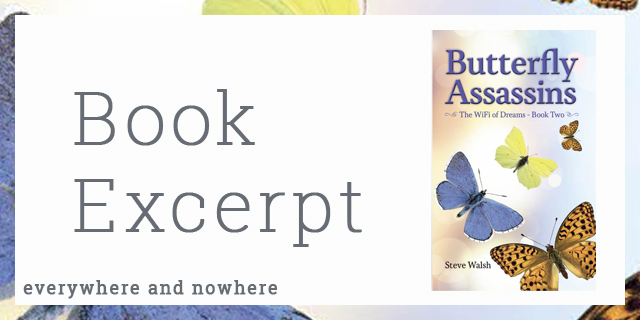 Wednesdays are to tempt you with books, to kick off the day here is an excerpt from Butterfly Assassins.

Sally Bennett was an orphan and an only child. Incomprehensibly, at the age of ten, both her parents died in quick succession. Proof that fate deals our cards blind. One can be dealt three buses in a row, a run of traffic lights on red, or a pair of deaths; it all depends on the shuffle. Destiny was playing its hand and having led with a heart, the face card of her mother, Sally had no other option but to follow suit.

When Wilson and Daisy play with the Tetris blocks of the future, problems soon stack up. Butterfly Assassins is the sequel to Wilson indeed and takes us back to Sally Bennett, the car accident, shared dreams, and a divine intervention outside Davenport train station.

Sally Bennett was an orphan and only child. Tragically and incomprehensibly, at the age of ten, both of her parents died in quick succession; her mother from breast cancer and two months later her father from a heart attack, or more likely, from heartbreak.

Proof, some would say, that fate plays our cards blind. One can be dealt three buses in a row, a run of traffic lights on red or a pair of deaths; it all depends on the shuffle.

In Sally’s case however, her cards were marked the day she was born, the deck was rigged, and all the odds stacked in favour of an intervention by Auntie Kay, the elder sister from her mother’s side and a Queen of Hearts from the Lewis Carroll side. Kay was a successful and famously feisty TV executive who worked for the BBC at Media City in Salford and lived in a tumbledown vicarage in the village of Cheadle, ten miles south of Manchester. A petite woman with features of child-like proportion and a porcelain complexion, Kay was a Mancunian, rather than a Manchurian, china doll.

Looks can be deceptive however, because bantamweight Kay was in a class of her own when it came to producing hard-hitting news features. A trade magazine once described her as, ‘taut like piano wire and as highly strung’. A compliment that not only caused Kay to buff her fingernails on the lapel of her jacket; she framed the article and hung it in the downstairs loo.

Kay was still grieving the death of her sister when eight weeks later, the catastrophic aftershock of her brother-in-law passing away left in its wake an apocalyptic landscape beyond all recognition. Not for a second did Kay hesitate in moving in with Sally to give all the comfort and support needed while a plan to rebuild two shattered lives was formulated. Several emotionally charged weeks slipped by as Kay waded through the interviews, paperwork and background checks relating to fast-track guardianship.

Towards the end of this process, some bureaucratic nonsense regarding a police caution for clipping a neighbour’s overgrown hedge and an argument with the Director of Social Services, whom Kay lambasted as ‘that dilatory jobsworth’, caused Sally to temporarily fall through a gap in the system.

For twenty years Steve Walsh honed his skills in prose as an advertising copywriter; the ‘ideas’ man in a Manchester based marketing agency that carried his name.

In the late 1990’s he stumbled into the world of the dotcom entrepreneur and his claim to fame is as the creator of the hotel booking service, laterooms.com and the first car insurance comparison site, easycover.com. So, the birth of Meerkats, a Welsh opera singer and being confused.com might be considered as down to him, for which he apologises.

He now uses his vivid imagination and gentle Mancunian wit to write visionary fantasy novels with bold concepts. Wilson indeed, the first book in his trilogy The WiFi of Dreams takes the reader on a richly imagined, fact meets fiction adventure story to which we can relate and feel we can touch. A whimsical interrogation of the inexplicable and fundamental tenets of our lives – the role and meaning of dreams, the nature of the hereafter, hard and soft science, a love story – what more can you want?

Butterfly Assassins, the second book in the trilogy, will be published in Summer 2021.

In a recent survey, 85% of people said yes to the question: “Do you believe there are things out there that science can’t explain?”

If you’re one of those 85%, you’ll love The WiFi of Dreams series.

Born and bred in the north west of England, Steve Walsh has three children and likes to fly fish in his spare time.