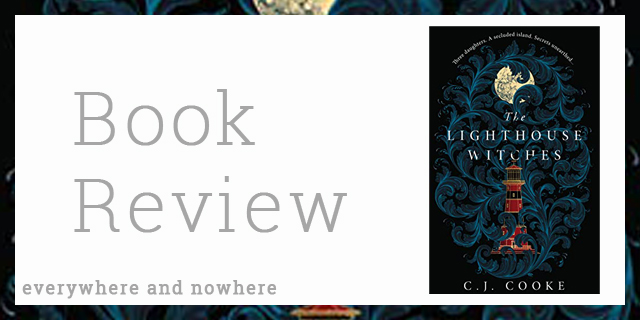 After a bit of a holiday month in October I am back to it with a review of a book that is perfect for this spooky time of year.

Two sisters go missing on a remote Scottish island. Twenty years later, one is found–but she’s still the same age as when she disappeared. The secrets of witches have reached across the centuries in this chilling Gothic thriller from the author of the acclaimed The Nesting.

When single mother Liv is commissioned to paint a mural in a 100-year-old lighthouse on a remote Scottish island, it’s an opportunity to start over with her three daughters–Luna, Sapphire, and Clover. When two of her daughters go missing, she’s frantic. She learns that the cave beneath the lighthouse was once a prison for women accused of witchcraft. The locals warn her about wildlings, supernatural beings who mimic human children, created by witches for revenge. Liv is told wildlings are dangerous and must be killed.

Twenty-two years later, Luna has been searching for her missing sisters and mother. When she receives a call about her youngest sister, Clover, she’s initially ecstatic. Clover is the sister she remembers–except she’s still seven years old, the age she was when she vanished. Luna is worried Clover is a wildling. Luna has few memories of her time on the island, but she’ll have to return to find the truth of what happened to her family. But she doesn’t realize just how much the truth will change her.

There really is nothing like an eerie Scottish setting in a book, especially when there are witches and wildlings about. I remember hearing about this book earlier in the year and thinking that it sounded fantastic but I don’t think I had envisioned that it was going to give me goosebumps. This is an atmospheric and intense story that got dark and creepy but in a way that kept me transfixed to the pages, I did find it a little slow to start but once the mysterious things started happening I couldn’t put it down.

The story is told through three main perspectives Liv and Saffy in the past and Luna in the present day as well as some excerpts from a historical book that Saffy is reading, that gives more detail on the witches that were kept in the lighthouse. I enjoyed the change in perspectives, getting to see the different stages of the story through different eyes but also because it added to the mystery of what happened to Liv, Saffy and Clover, and gave me enough questions that I couldn’t help but be invested in discovering what the outcome would be.

I found it quite hard to find my feet with this family in the beginning but actually, that turned out to be a good thing because it meant that I had no idea what was going to be revealed next, they all had secrets and adding that to a place that has some big secrets too just makes for some perfectly tense and thrilling reading. The characters are all so well written, they all felt so realistic there were times that I could empathise with them and times that I couldn’t believe what they were doing, and I felt like the relationships were so brilliantly presented, flawed but profound.

I enjoyed delving into the past with the sections from the Grimoire and finding out about how the witches came to stand trial and how that related to what was happening in the current timeline. I won’t say much about the plot but it is very clever and unexpected, right until the end I kept being surprised and I could never predict which way the story would go; I also liked that it was getting more ominous as the story went on, but still had love and family at its core.

The Lighthouse Witches is a well-written and intriguing gothic thriller that is perfect company for the dark gloomy nights, expect the unexpected and to be thinking about this book long after you’ve finished reading it.

Reviews of other books by C.J. Cooke
The Ghost Woods