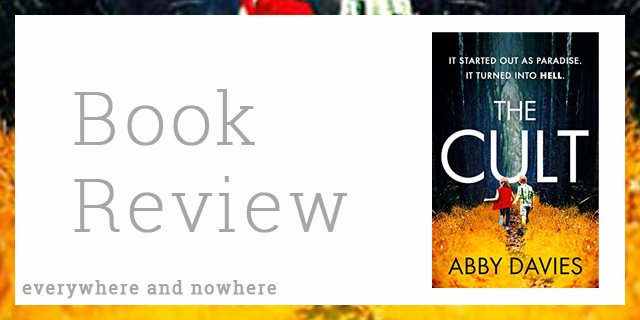 Happy to get back into reading and a dip back into crime for a little change of pace.

Thirty years ago, in the English countryside, a commune was set up. Led by Uncle Saviour, it was supposed to be a place of love, peace and harmony. But what started out as paradise turned into hell.

Now, two young children have vanished from their home in the middle of the night. Their parents are frantic, the police are at a loss.

DI Ottoline is leading the search – her only clue a mask found in the woods. Could the key lie in events that took place decades ago, when a dream of a new way of life became something far more sinister?

When I read the blurb for this book it sounded like it had a lot of elements that would make this story fast-paced and interesting and keep me hooked. Unfortunately, though it did start out in a pretty intriguing fashion it didn’t quite capture my attention in the way I had hoped.

The story is told over two different timelines but through three different perspectives, in the past, we hear from Love who is a member of the Eternal Life cult, and in the present, we have Lily, the mother of the missing children, and DI Ottoline, the detective on the case.

I felt like for the majority of the book Lily’s POV was entirely irrelevant and then only really made sense in the last couple of chapters but by that point, the story had kind of veered into something a little ridiculous, in my opinion. In all honesty, I also feel like Ottoline’s POV was not crucial to the story, like there wasn’t too much importance placed upon it, but perhaps if Lily’s POV had been sacrificed it would have made the space for the DI’s POV to be more fleshed out.

The past narrative was very interesting, it added lots of chills because of the sinister nature of some of the characters in the cult, and gave a good insight into the manipulation and coercion that was happening between its members and those unfortunate enough to cross paths with them. I felt like this was the strongest part of the book however the story didn’t get me invested enough to make me feel shocked when the cult takes a bit of a turn, I thought that the dynamics had been wonderfully tense and made for some great reading but lost a lot of steam when the cult evolved into something different.

As you can imagine I didn’t really take to a lot of the characters, some because they are obviously not the type of people you warm to but also because a lot of them felt undeveloped. I didn’t feel like I got to know them well enough to really care about what was happening, I also felt like the author was maybe trying to misdirect the reader with some of the characters’ traits but that that was the only purpose for them. As an example Lily has an unknown mental health condition that she has to take pills for, this isn’t ever really explained, I felt like it was to make her seem unreliable and erratic but her storyline doesn’t have anything in it that would make that necessary so for me, in the end, it was just another thing that didn’t make sense.

I feel that with this story the author had all the right elements but it just didn’t quite come together in its execution, there were too many unanswered questions that I don’t think were deliberate, it feels like a lot of things were glossed over to move the story along. Don’t get me wrong I still read the whole book and I did enjoy parts but it was missing the edge of my seat feeling that I hoped for and as we headed toward the climax the story did start to feel more and more bizarre.

This book wasn’t quite what I thought it would be and whilst there were a few intriguing parts they weren’t really strong enough to keep me captivated, but I’m sure there are readers out there who would enjoy this story.