I’m very pleased to welcome you to my stop on the Reality Rehab tour there is another stop over on Rae Read’s so be sure to check that out too. I have a hilarious guest post for you today but first this is what the book is about.

Faded TV star Gloria Grayson has hit rock bottom. Sacked from her starring role in a top soap, divorced from hell-raising actor ‘Mad’ Tommy Mack, and obese from binge eating, her days as Britain’s sexiest blonde are well and truly over

Gloria has gained 70 lbs when a paparazzi snaps unflattering photos and a cruel tabloid article relaunches her career. Instantly she and her fat, feisty dog Baby-Girl are booked for TV’s Reality Rehab.

Gloria is locked up with an American psychotherapist, a rabble of D-list celebrities and umpteen cameras, then put on a starvation diet. But worse is to come, with the shock arrival of her alcoholic ex-husband.

Tears and tantrums ensue as the divorced couple’s joint therapy sessions take over the show and ratings soar. The other celebrities are infuriated to be sidelined and Reality Rehab fast becomes the Tommy and Glo Show. But Gloria and Tommy are hiding explosive secrets from each other and 10 million viewers – Reality is stranger than fiction

Reality Rehab is the debut novel of Lisa Mary London, a journalist and former reality TV producer. A cast of hilarious characters, cliffhangers galore and an authentic voice that could only come from a TV insider, Reality Rehab is this year’s must-read!

Dolly-Dog has owned Reality Rehab author Lisa Mary London for 12 years. The glamorous Maltese Terrier is rumoured to be the inspiration for actress Gloria Grayson’s spoiled dog, Baby-Girl, a claim she hotly denies (“I’m much prettier than that mutt and a helluva lot slimmer!”)

The unending ambition that drives you on?

To find a bigger sausage. Lisa says lots of girls can relate to that.

The prized possession you treasure above all others? 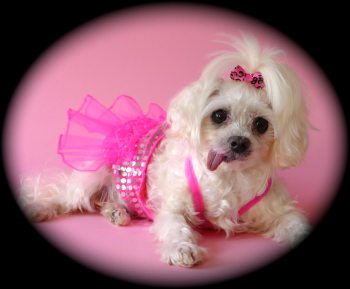 The movie you can enjoy watching time and time again?

‘The Bitch’, of course – who doesn’t love Dame Joan Collins?

The crime you would commit if you knew you’d get away with it?

I’d break into Joey Essex’ mansion and eavesdrop, to find out if he’s as stupid off-camera as on. I reckon he’s an evil genius plotting world domination – let’s face it, he’s doing pretty well so far.

The misapprehension about yourself you would like to eradicate?

That I’m not a natural blonde.

The vision that moves you above all others?

The strings of sausages hanging in my butcher’s shop window are a thing of beauty. I dream about wearing dozens of them round my neck feather boa style, like a furry Liza Minnelli in ‘Cabaret’.

The pet hate that makes your blood boil?

Randy boy dogs who are stupid enough to sniff my rear end. They wake up dazed and confused, with a crowd gathered around them.

The overriding principle that guides you?

Never book a bargain break to China, Korea or Vietnam.

The biggest regret you wish you could erase?

Marrying actress Sherrie Hewson’s dog, live on ITV’s ‘Loose Women’ (available on You Tube). I was swept away by the glamour of it all – the TV cameras, the Harrods bridal gown, the foie gras wedding cake… But marriage is for life, not just for daytime TV. We divorced after a bitter fight over a Frisbee.

Your plan if you were invisible for a day?

I’d hang around the set of ‘The Great British Bake Off’ with my mouth open.

The figure from history you’d invite to afternoon tea?

The late, great Diana Dors – like me, a curvaceous blonde with attitude, who never said no to a doughnut.

Your priority if you were Prime Minister?

The temptation you can’t resist?

Men’s trouser legs. When I see fabric flapping round a hairy ankle the red mist descends and I latch on, like a man-trap with halitosis.

The treasured item you lost and wish you could have again?

My teeth. I’ve lost every last one, but to compensate I’ve developed a super-hard suck. I can strip a whole roast chicken to the carcass in five seconds flat – as countless Nandos staff will vouch.

Dolly Parton – My idol, I was named after her for my platinum blonde tresses and huge lungs. Ant and Dec – The Godfathers of reality TV. I’d serve them spaghetti bollock-nese with a side of kangaroo bum to pay them back. Martin Clunes – A great actor who loves dogs, and like me, he’s got a gob that could suck-start a Harley Davidson. Nigella Lawson – Because she’d cook fabulous food and provide a super-comfy lap for my after dinner snooze.

As a faithful friend, a fashion icon, and a girl who would sell her soul for a sausage.

Thanks Dolly-Dog, love the tutu!! 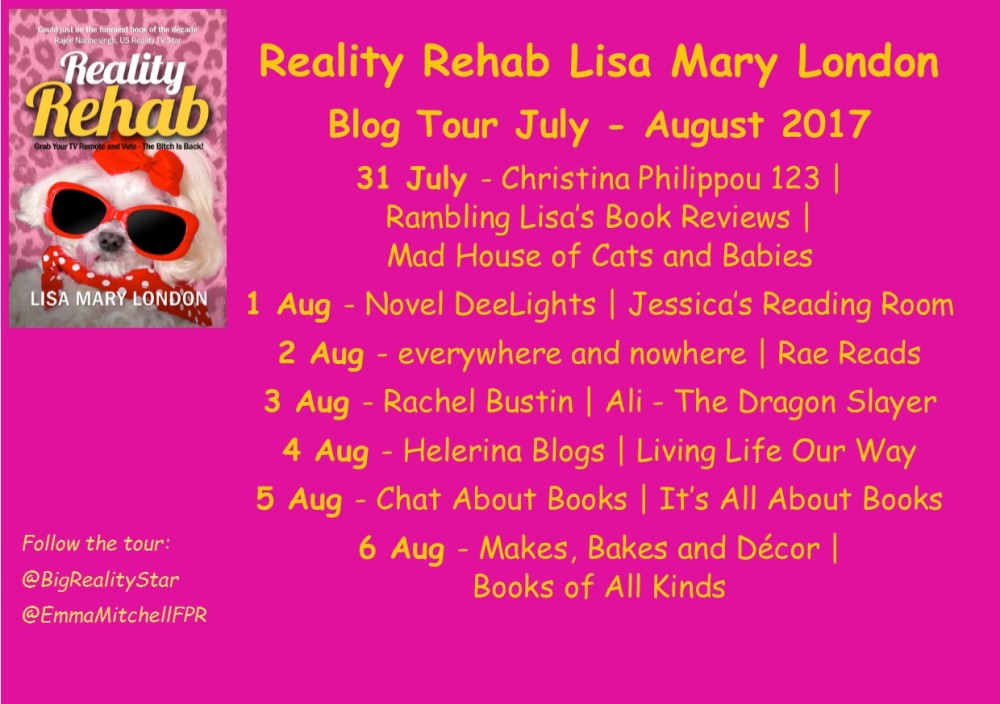 Lisa Mary London went from a reporter on a sleepy Gloucestershire newspaper to become celebrity producer on some of Britain’s best-loved TV shows. Her credits include: An Audience With Ken Dodd, A BAFTA Tribute To Julie Walters, The British Comedy Awards and I’m A Celebrity… Get Me Out Of Here!

‘There’s never a dull moment when you’re working with the stars’, says Lisa: ‘One minute you’re sipping champagne with Pierce Brosnan, the next you’re standing in the ladies minding Barbara Windsor’s handbag’.

Her new novel Reality Rehab is based on her real life, behind the screen experiences in television:
‘I’ve met many old-school stars like Gloria who curse the rise of reality TV and think the cast of TOWIE should be stacking shelves at Tesco, not walking the red carpet’.

‘Gloria’s a glorious, garrulous anti-heroine with bags of fatitude.  A heady mix of Diana Dors, Miss Piggy and Boadicea, Gloria puts the real in reality TV!’
​
A journalist by profession, Lisa has written for the Daily Mail and was briefly a News of the World reporter but made her excuses and left before anyone was imprisoned for phone hacking.