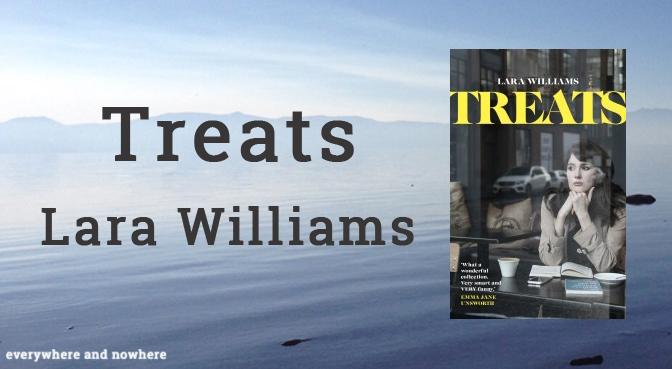 “It was the curse of the modern age, options: who needed options, when everything was essentially meaningless?”

So says one of the characters in Lara Williams’ extraordinary debut story collection. Treats is a break-up album of tales covering relationships, the tyranny of choice, and self navigation. This fresh, beguiling new voice paints a portrait of contemporary womanhood, balancing wry humour with a pervading sense of alienation.

Williams’ characters struggle with how to negotiate intimacy within relationships and isolation when single, the pitfalls and indignities of dating, dragged down by dissatisfaction. Meanwhile the dilemmas of contemporary adulthood play out, including abortion, depression, extra-marital affairs, infatuation, new baby anxiety, bereavement, hair loss, sexual ethics, cats, and taxidermy.

Last year whilst at the Edinburgh International Book Festival I went to an event called Smart & Very Human Short Stories, it was an event that I’d just picked at random because I liked the sound of it. Turned out I really enjoyed listening to the two authors talk and ended up putting both books on my wish list.

In a very happy turn of events, the Book Festival ran a 12 Books of Christmas giveaway on twitter where they gave away different book each day. Can you guess which book came up yet?! I thought hey, why not, I never win but what’s the harm…and then I won, which was surprising but I was really pleased.

Each of these stories is a glimpse into modern day lives and relationships. They are for the most part brutally honest, which I think is part of their charm, whilst also at times being hilariously funny or heartbreakingly sad.

They are up before me, bobbing and twitching, pipping like flirts. They are a terrible roommate; with their squawking and their hollering, with no respect for emotional space, no respect for sleep. They are right gossips;cheaping secrets, who did what with who, and how. They are fat ballerinas. They are out-of-tune chanteurs. They are worse than that. They are – morning people

The writing is witty and sharp but accessible, I found it very easy to immerse myself into the stories. The way she manages to pick apart the small details to create imagery is fantastic and it’s these small observations that really makes the words hit home.

I also admire that in some of the stories not everything is given away, sometimes the conclusion is left up to your imagination. I like that they weren’t all rounded up neatly at the end because it made the characters and the situations seem more realistic and more relatable.

When Joseph’s eyes opened, Flora squeezed hers shut, pretending. She lay still a while, waiting for him to get up, finally peeping to see if he’d fallen back asleep. On opening her eyes, she caught him blinking his shut, the same theatrics, rolling over, exhaling loudly.

My only criticism is that a few of the stories had a lot of similarities and the details kind of merged together. I think if there had been one or two stories that were a bit more divergent from the overall theme then it would have broken it up a little.

I would definitely recommend picking up Treats for the wonderful writing and because you are sure to find stories that will make you laugh or make you sad but no matter which will resonate with you. I’m so very grateful to Edinburgh Book Festival for my copy.