Welcome to my stop on the blog tour for Light Years before I let you know what I thought here is what the book is about. 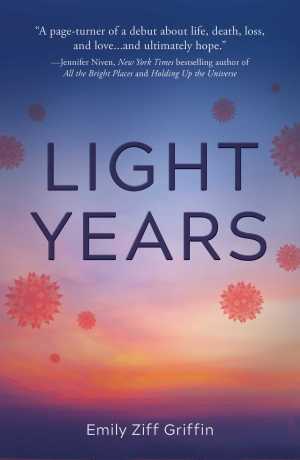 As a mysterious virus infects the world’s population, a girl embarks on a quest to find a cure in this thrilling debut from Emily Ziff Griffin.

Luisa is ready for her life to start. Five minutes ago. And she could be on her way, as her extraordinary coding skills have landed her a finalist spot for a fellowship sponsored by Thomas Bell, the world’s most brilliant and mercurial tech entrepreneur. Being chosen means funding, mentorship, and most importantly, freedom from her overbearing mother. Maybe Lu will even figure out how to control the rare condition that plagues her: whenever her emotions run high, her physical senses kick into overload, with waves of color, sound, taste, and touch flooding her body.

But Luisa’s life is thrust into chaos as a deadly virus sweeps across the globe, killing thousands and sending her father into quarantine. When Lu receives a cryptic message from someone who might hold the key to stopping the epidemic, she knows she must do something to save her family—and the world.

This has been an interesting book to try and write a review for. It’s a book that I really didn’t want to put down, the kind that I felt so engrossed with that I accidentally ignored people when they were talking to me, and I was loving it all the way through. However it’s the kind of book that when I reflected on it, which it does really leave itself open to, there were a few things that I picked up on which then retrospectively lessened my opinion of it. Not at all to the point where I would say that I didn’t enjoy the book because I did but more that I was disappointed that after being so enthralled with it, that instead of it sticking in my mind because I thought it was amazing, instead what stuck there was a lot of questions that I feel need answering.

I liked that Luisa has a different way of experiencing the world; her senses interpret differently to what would usually happen so she can see colours for emotions and certain people have a taste. On doing some further research I found this is an actual condition called synesthesia and I quite liked that I learned something new, and the way that her having synesthesia fit into the story was clever, but it was also kind of a double edged sword. The impression I got from the book was that it was made up, maybe because it’s never given a name but someone who is able to create a code to discern people’s emotions from social media reactions can surely look up this difference about them and put a name to it.

I didn’t particularly connect with any of the characters, well strangely enough possibly Luisa’s Dad was the only one and that is possibly because he was given a lot of depth, whereas the other characters didn’t get explored that much past a superficial level. I did like that it felt as if Luisa was growing as a character as the book went on but I would maybe have liked to have gotten a bit more under her skin. I did, however, feel a lot of emotion throughout the book, not directed at any particular character but because of the situations that arose.

I think that this emotion and the way this book got to me was because of the writing, there was something very lyrical about it, it flowed so well and was able to let you easily picture what Luisa was experiencing. As much as I maybe wasn’t as drawn to the characters, the way some of the relationships are written; especially that of Luisa and her family and even Luisa and Kamal; really stood out, the way the author describes some of these scenes is what keeps you connected to the story.

Some of the concepts in the book were very clever, like Front Line the volunteer organisation that effectively steps in to help run things when it becomes clear that the government doesn’t have the necessary skills. Also the ARNS virus, it turned out to be something that I wasn’t expecting which can be difficult in a book of this nature, so I was pleasantly surprised.

However on reflection, there is a character called Theodore Nam who is crucial to a certain plot point, I’ll try not to spoil it so this might seem a bit vague, but once I finished reading I realized I wasn’t sure what his motivation was in trying to help Luisa. After finishing the book it even seemed counter productive.

Also, I’m not sure on the ending, I hope this isn’t giving too much away, but if this is meant as the first book of a series then I can see why it ended where it did. I still feel like there were too many unanswered questions but that I could live with if there is another book. However, if this is a standalone then for me it definitely was left a little too open. Unfortunately, I’m not sure which it is so I suppose I’ll have to wait and see.

I would still highly recommend Light Years, I was completely engrossed in the story even though there were some points, on reflection, that I was disappointed with. The writing was wonderful and I am very much looking forward to seeing what this author comes up with next.

If you want to find out more about the book then click the button below to find other stops on the tour.

Emily Ziff Griffin lives in LA where she writes, produces, teaches, daydreams, and mothers two young kids. When she was 25, she co-founded Cooper’s Town Productions with Philip Seymour Hoffman and produced the Academy Award-winning film, ‘Capote,’ along with Hoffman’s directorial debut ‘Jack Goes Boating,’ and John Slattery’s ‘God’s Pocket.’ She’s run three marathons, slowly, and holds a degree from Brown University in art-semiotics, the study of how images make meaning. She believes children are way more sophisticated than adults typically give them credit for and writes for the teenager who is ready to claim their own worldview and be grounded in their own power. ‘Light Years’ is her first novel. Find her at www.emilyziffgriffin.com.