Happy to be one of the blogs kicking off the tour for this phenomenal book. 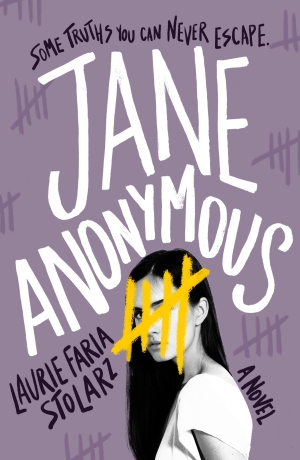 Bestselling author Laurie Faria Stolarz returns with Jane Anonymous, a gripping tale of a seventeen-year-old girl’s kidnapping and her struggle to fit back into her life after she escapes.

Then, “Jane” was just your typical 17-year-old in a typical New England suburb getting ready to start her senior year. She had a part-time job she enjoyed, an awesome best friend, overbearing but loving parents, and a crush on a boy who was taking her to see her favorite band. She never would’ve imagined that in her town where nothing ever happens, a series of small coincidences would lead to a devastating turn of events that would forever change her life.

This was kind of a strange book to start off my reading year, not that I knew that when I picked it up, but honestly I don’t think I’ve felt this emotionally invested in a book in a while. The kind of invested where I felt every little thing that happened and it really started to affect my mood because there were a lot of heartbreaking moments in this book and gave me a severe book hangover for days after reading.

The pace of the book is brilliant, I managed to finish it within a day because I was so gripped I didn’t want to put it down. It’s told in two sections, then and now, and is at the same time exploring what happened to Jane in her captivity and how she is dealing with the aftermath of that captivity. I was pleasantly surprised at how it felt like a thriller book even though for me the draw of the story was really in Jane’s character progression and how she had to reacclimatise to day to day life.

I do still feel like there could have been more depth or focus given to Jane’s relationships in the now section, unusually I found myself less interested in the who and the why of her abduction so would have maybe preferred more of the balance shifted toward her trying to reconnect with friends but despite that, I still feel that this book is a must-read.

I feel like there is so much more that I want to say but this is the kind of book that I can’t describe accurately without spoiling that obsessive must read more feeling that I feel like most people will get with this book. What I will say is that it is well written, engaging and will definitely put you through the emotional wringer, this is an author that I would easily read again.

Laurie Faria Stolarz grew up in Salem, MA, attended Merrimack College, and received an MFA in Creative Writing from Emerson College in Boston.

Laurie Faria Stolarz is an American author of young adult fiction novels, best known for her Blue is for Nightmares series. Her works, which feature teenage protagonists, blend elements found in mystery and romance novels.

Stolarz found sales success with her first novel, Blue is for Nightmares, and followed it up with three more titles in the series, White is for Magic, Silver is for Secrets, and Red is for Remembrance, as well as a companion graphic novel, Black is for Beginnings. Stolarz is also the author of the Touch series (Deadly Little Secret, Deadly Little Lies, Deadly Little Games, Deadly Little Voices, and Deadly Little Lessons), as well as Bleed and Project 17. With more than two million books sold worldwide, Stolarz’s titles have been named on various awards list.