The Friday 56 is a weekly bookish meme, hosted over at Freda’s Voice.

All you have to do is

The table by the lounge window was covered with tins of food – tomatoes, meatballs, sweetcorn, tuna, pears – but in stark contrast to the objects strewn across the rest of the room, these were neatly lined up, like for like.

At one end of the table, a perfectly square space was empty, occupied by a raffia placemat with a faded picture of Big Ben and the Houses of Parliament. A knife and fork, perfectly aligned, sat either side of the mat. It was the only part of the entire place that looked clean and orderly, and Cora’s eyes kept being drawn back to the spot.

How, she asked herself, had Clare Henderson ended up living like this?

The Deadline by Jackie Kabler 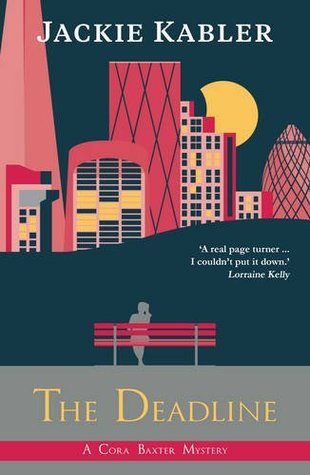 Cora Baxter is back – and this time, she’s facing the most important deadline of her career…

When TV reporter Cora Baxter attends the scene of a murder in a London park, she’s horrified to discover the victim is someone she knows – and devastated when one of her best friends is charged with the crime. Suddenly the fun-filled life of Cora and her eccentric camera crew takes a darker turn. Cora is convinced that her friend is innocent, but with seemingly solid evidence, the police investigation team – reluctantly led by Cora’s boyfriend DCI Adam Bradberry – believe the case is closed. With a trail of clues that leads all the way to New York, can Cora find out the truth before the trial begins – or is it already too late?

The Deadline is the second in the hugely popular Cora Baxter Mysteries series by acclaimed broadcaster Jackie Kabler.