On Monday I found myself digging out my recipes for Cranachan, a traditional Scottish dessert. Unfortunately since my recipe book tends to be lots of scraps of paper, piled into one notebook, in no particular order, I couldn’t find it. So I took to my computer to find one.

What I dislike about baking from internet recipes is that I generally always need to adjust them, so it can be a little hit or miss if I’m making them on the spot. The recipe I was somewhat following came from this article in the Guardian; luckily I remembered a few bits and pieces from making it before that I could incorporate. So I thought I would share it with you:

I managed to feed seven people with this recipe, bearing in mind that we had just had a two course hearty dinner, so the portions weren’t huge. They were definitely big enough though.

First I put the majority of the raspberries in a deep bowl, I didn’t use an exact measurement of how many, but I left enough to put about 2-3 on the top as a garnish. I squeezed the juice of half a lemon into the bowl and added a good sprinkling of brown sugar as well. Then with a fork crush the raspberries until there aren’t any large pieces left and it has a sauce like consistency.

Next for me was whipping the cream, I did it by hand but you can use a mixer, whip it until it forms reasonably stiff peaks, I then set it aside to deal with the oats.

Put a frying pan on a low heat to warm up, place greaseproof paper on a baking or cooling tray, and then put the oats and one tbsp of sugar in the pan. Turn the heat up to a medium level and stir the oats; you’ll know when they are ready because of the smell but also because the sugar will have melted. Transfer the oats onto the greaseproof paper and leave to cool.

Returning to the cream, measure the honey and whisky into the bowl, and then fold the mixture together until it is well combined. I was using quite a strong whisky so it only needed two tablespoons but you should taste it and see if you need more, depending on what whisky you use, just remember to add a little more honey to balance it out.

Add roughly three quarters of the oats to the cream and stir them in well, after this spoon in a dollop of the cream to the glass, ramekin or bowl you are serving it in, then spoon in some of the raspberry puree. Repeat this as often as you like, finishing it off with a sprinkling of oats over the top and then a few of the whole raspberries, you can also add some more honey but I find that the sugar in the oats makes it sweet enough.

Its best to serve up pretty soon after it’s made otherwise the oats loose their crisp, the good thing is that it is quite quick to put together so you can do it on the night. Plus you can pre make the raspberry puree and cream if you want to speed up the process. 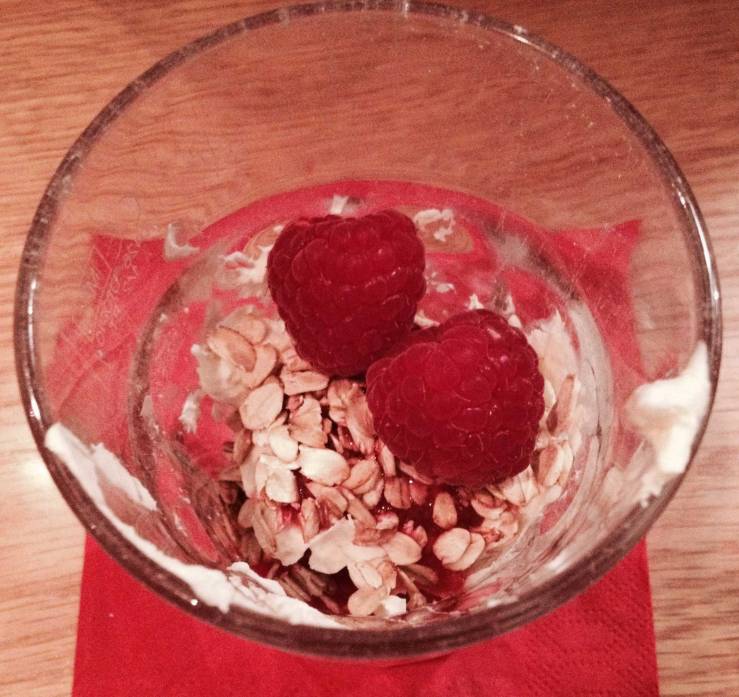 So hopefully that all made sense, I didn’t realise quite how hard it was to explain something without using the same descriptive words over and over again. So that was a learning curve.

Also excuse the pictures; I was perhaps under the influence of a little wine and a little whisky, because it doesn’t just go in the cream.